On June 15, 2017 Robert, Bob, Bienvenu and his TV crew for “Insight into Mental Health” attended a gala awards banquet presented by AOC, Acadiana Open Channel, TV organization. Ed Bowie, the director, congratulated all the TV producers, personnel & volunteers for a tremendous season and gave out awards to long term members and also gave the Gumption & Guts award to the show that had the guts to go on air and talk about controversial social events and problems that affect everyone like news, mental health, poverty and such. Bob Bienvenu and his crew accepted one of the Guts and Glory awards. Shown from left to right are Lucy Fournette-director, Bob Bienvnenu-producer, Emily Welch-co-host and Jerry Bushnell, co-host. 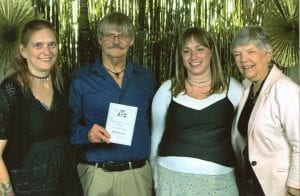