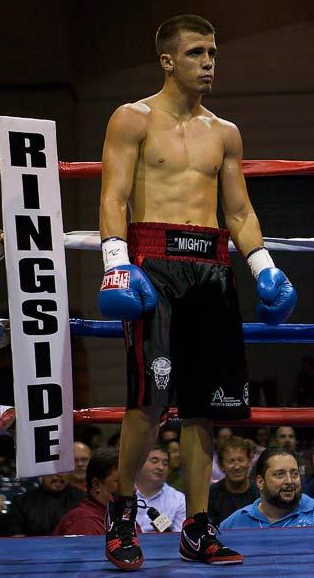 On July 31, 21-year-old hard-punching lightweight prospect Mason Menard (11-1, 9 KOs) will get the opportunity to win the Universal Boxing Organization All-America Lightweight title when he faces an opponent to be announced at the Civic Center in his hometown of Rayne, Louisiana. The fight will be promoted by Chad Broussard and his Boxncar Promotions. Mason is a member of Red's & is available for Personal Training also at Red's

Menard made his professional debut in October 2007. Just five days after his nineteenth birthday he knocked out fifty-four-fight veteran Richard Dinkins in the second round to get his promising career under way.

After scoring another convincing victory the following May, Menard suffered an unexpected setback in August 2008 when fellow prospect Carl McNickles (4-1, 4 KOs at the time) overwhelmed him in the first round of a fight at the very same venue where Menard will fight for the UBO title on July 31.

The loss didn’t change the fact that Menard is a very talented fighter, and he proved he has a big heart to go along with that talent when, in his first fight back after the McNickles loss, he was knocked down in the first round and got right back up to stop his opponent, Blake Franklin, before the round was over. Boxers with less determination could easily have lost faith in themselves in a situation like this.

Five more victories followed before Menard fought for his first professional title. In October 2009 he boxed John Temple for the vacant Louisiana state lightweight title, and didn’t waste any time getting rid of his opponent in the second round. This past February he defended the title with a fourth round stoppage of the 8-1 (5) Thomas Darder, scoring his best victory to date in impressive fashion.

Menard, nicknamed “Mighty”, last boxed on April 9 where he blasted out journeyman Reggie Nash in three rounds to clear the way for his UBO title fight. He has so far shown impressive punching power, and will undoubtedly be looking for another knockout, and his tenth straight victory since the McNickles disaster, on July 31 in front of his adoring fans at the Rayne Civic Center.