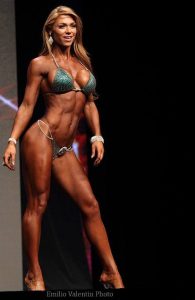 Also guest posing will be IFBB Pro Bodybuilder Mr. Sergio Oliva, Jr.  Sergio, son of the late Sergio Oliva, Sr who was Mr. Olympia 3 times in the 1960’s. Prejudging is set for 9am to 11:30am and doors open for the Finals at 5pm with the show to begin at 6pm.

In between the Prejudging and the Finals Red’s will host both guest at 12noon in a “Meet & Greet” informal gathering upstairs at the club. Come by and say hello to both special guest.

Tickets can be purchased at the door all day Saturday at the Heymann box office or in advance at any TICKETMASTER outlet in person or by phone or internet.   Best seat and value is the VIP ticket which includes admission to all events: Prejudging, Seminars, and Best Seats at the Finals. Ticket price for VIP is $45 plus Ticketmaster/Box Office fees of $4. Remaining tickets for rear floor seating is $35 plus Ticketmaster/Box Office fees.   Get you tickets in advance or early that day at the box office if possible. Tickets for prejudging are General Admission $25 at the door with all box office/Ticketmaster fees included.

For more information or official entry form visit the event website at www.LaChampionships.com. You may also contact Tommy Guarisco of Magnum Productions at 985/868-3936 or by email at fitshow@bellsouth.net The event is sanction by the National Physique Committee(NPC). For rules and regulations visit www.npcnewsonline.com